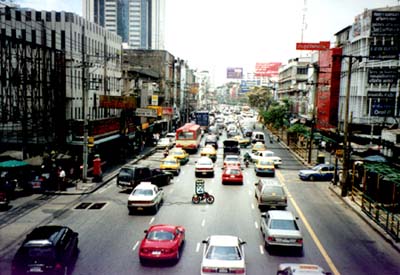 OK, it looks bad, but Bangkok's actually easy and fast on a bicycle. In the above photo Mr Pumpy is being a typical farang and asserting his 'on-road' individuality (sometimes known as 'causing confusion'), by crossing Ratchaprarop Road against the traffic. The Thais, knowing that farangs are just a little above monkeys on the evolutionary scale, have learnt to expect the unexpected, and are backing off to give him some space.

There's a big novelty factor in being a farang on a bike, and the locals are very courteous and give you a good, wide, easy run through. I've had big buses shepherd me across Rama IV during peak times, tuk-tuk drivers lean out and shake my hand and always the waves and smiles from other cars at intersections. You're in safe hands!

You can get across town quicker than any public transport, cut through 'one way' streets the wrong way and follow the river along the back alleys to most tourist destinations. It's a breeze.