To the ride: Thailand: North to ChiangMai
To 'cultural sensitivity': I am not a baboon!

My bike's on fire!

Mr Pumpy's guide to nutting out the Thais

The Good Oil from Mr Pumpy: You'll spend a lot of time in Thailand trying to 'work out' the Thais.

It's all very confusing, but Mr Pumpy has been there, and he's gonna help you slide through like a ferret in a lubricant factory. Read on...

Below: Another Westerner makes a complete dork of himself in Thailand. 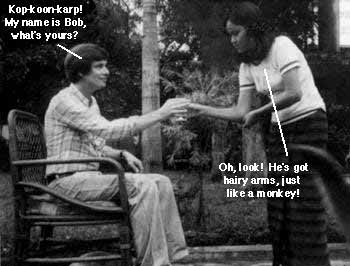 'Kop-koon-karp' is a Western approximation of 'thank you' in Thai. The Thai girl's fixation on the simian qualities of Bob's forearm is normal.

Unlike Westerners, who are taught to defend themselves against social aggression ('I know my rights!', 'Hey, man, get outa my face!', 'This is just not right!', 'Just say No!', etc), Thai children are taught to avoid social conflict.

If Thai children fight, even in self defence, they are usually punished.

This is often very confusing for Westerners, who can't work out why the Thais don't just 'come right out and say it' when something is wrong. Well, they won't.

Thais go to great pains to not ruffle any personal feathers and keep things socially harmonious.

This is one of the great things about living in Thailand, and one of the first things one notices about coming back into the West: it's so socially aggressive.

One of the things Thais do to keep things oiled is hand out compliments. 'Oh, you very handsome!', 'What lovely hands you have!', 'Your nose is very beautiful!' etc.

Enjoy it, but understand that it's just part of the social system.

'The Thais are a happy people' - old tourist saying

If a Thai person is unhappy with you, they'll hint at it, rather than confront you directly. You're meant to pick up on the hint, and modify your behaviour.

If a Thai person is very unhappy with you, and you haven't picked up on the hints, they're likely to act when you're not around.

My bike's on fire!

If you come down for breakfast at the hotel to find your bike's a smoking ruin, it's probably because you rode it naked through the restaurant the previous evening.

How were you to know the 'Buddha sticks' were so strong? Well, yeah, the sign said: 'No bar girls allowed in the rooms', but gee wiz, this is Thailand!

There's no point getting angry, the social balances have been restored. You're forgiven. Just cut down on the drugs and girls and you're well on your way to being treated with respect.

There's a saying amongst ex-pat Westerners in Thailand: 'You're safe as long as the Thais don't get angry!'

If the Thais are really, really upset with you and they actually show anger, then you've got a real problem.